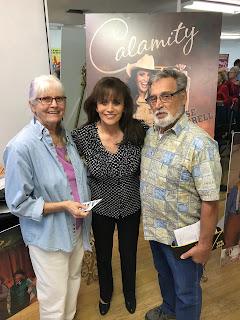 For many years we have attended Roger Rocka's Dinner Theater, in Fresno. It was a Sunday Luncheon fun with friends. Then add to it the Good Company Player's Productions.

This year Louise Mandrell played the lead in Calamity Jane. It was amazing, and the Mandrell sisters are fantastic. Louise played a number of instruments during the performance. Along with amazing dancing, singing and acting. Such energy. It made us all sit up straighter, laugh, and totally enjoy every moment.

When Louise offered to have photos taken after the show, Ralph said lets go for it. I had never done this sort of thing, but was game that day. All Ralphs kids have been in various venues in the theater and movies, so I took Ralph's lead. He had a serious look, but I thought it was all fun.

Louise is not performing as much now preferring to be home with family in Nashville. So we were privileged to attend this performance. 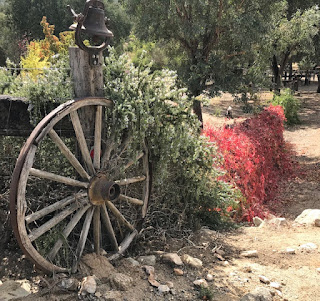 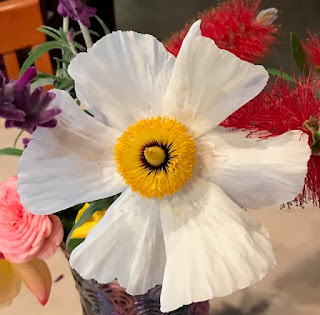 A Peek with My friend Kathleen Mattox and Thank you!

Thank you everyone for your kind thoughts.  So far this year has certainly been interesting, and a learning experience. I am still adjusting and most of all, my pantry is adjusting, or shall I say slimming. Kaiser has a great approach, and I have a Cardiac Nurse for the next 6 months. Had a meeting last week and reviewed eating habits. This will take some adjusting, but I have lost 6 lbs. Well, enough of this, except to say Thank you!
Before all the changes we had a wonderful day with my friend Kathleen Mattox. She is a marvelous artist and has the most adorable art gallery, Mixed Messages, in Sanger, Ca.  We all had a delightful lunch in Restaurant in town. A very small delightful place with delicious Greek food.
Isn't this this cutest front door to a gallery, just says, "Come In". And now for the inside.
I could spend hours looking at all the goodies. Kathleen is not just a painter, but a quilter and artist of many talents.

Most galleries have dignified, grey or whit… 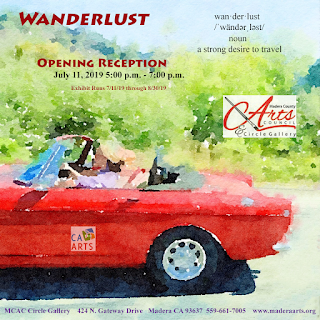 I just noticed I can't make it because I have a demo at the Sierra Mountain Quilters that evening. What a disappointment. But it should be great fun. Be sure and stop in because there are many exhibits, tons of arts, jewelry, gourds and all sorts of arts. Remember they have some wonderful gift ideas, if you have a birthday in the near future.
I have 2 pieces in the exhibit, and other art pieces around the gallery.  Enjoy!
Remember this exhibit runs for 2 months. And then the Ag Exhibit.

This is" Point Bonita - Second Home"
.  Lots of fun 3 d. pieces. Hand painted back ground and my  hand dyed fabrics. Memories of Cayucos, is my second piece. I seldom put two pieces in a show, but these are small., Lots of hand dyed fabrics, and stitched outlines of turtles, sand dollar and fish in the sky or water. I should make more of the small pieces because it is fun and they get done! Do you have a memory of the ocean? Have you been to Cayucos? Beautiful area, and we the "YoYo…