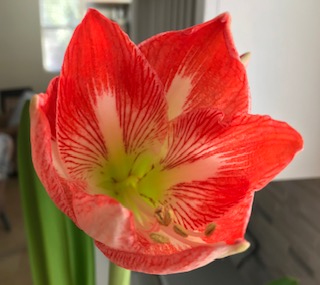 Bought my first Amaryllis  Bulb.  There are 4 flowers and they are lovely. So excited to have that flowering in my kitchen. Not sure what to do with it after it is finished, but will look it up. 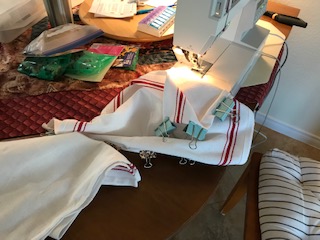 I had purchased some dish cloth fabric, and put my sewing machine out on a corner of the dining table. Seems like eons since I  have sewn anything and was excited to just hem the dish towels. Maybe next time will just purchase at Michael's or Jo Annes. Both stores I have found in Vegas.More about that later. 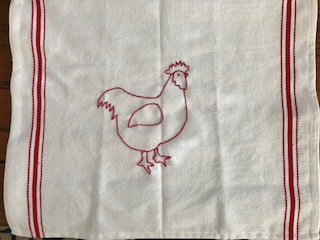 I transferred the chicken the old fashioned way on the sliding glass door. I could have drawn a few flowers but I was so excited to send this to our Homesteading Gran in Mo. that I went on to draw a Rooster on another dish towel and both have been sent now.

There is only one Joannes near us in Vegas. The other one is in Henderson. But the Vegas one is the biggest Joannes, I have ever seen. I had a great time wandering around the store, and might have done more damage, but showed restraint.  When I went to the check out, I told the lady that I wanted to register because we had just moved. Get the App on the phone.This world is nothing but apps. " But is  your husband in the military or retired from it?"  Yes, I ran to get Ralph and got a nice discount because of him.. Think in the future he will have to come with me shopping at Joannes. And it is not far from our home.

More personally, I hope I can remember all the steps our son gave me on the phone on how to get the photos into my Photos and then again on the blog. He had about 3 ways to do it. and I have lots of notes. So here is hoping that if I write several times, maybe each day. I will get in a new rhythm.

I hope everyone is doing well, Thank you for your supportive Comments, I sooooo appreciate the support.  Still unpacking, have had a few health issues, but onward. I have about 5 more boxes in the "studio" that need attention and then I can start to mentally organize how the room will end up. I think for the moment however I will just put up the ironing board and the tables for the sewing machine. My Sweet 16 and just organize the books and shelves. In unpacking I came across lots of Starts, but have no idea where I put them.  More photos on that later. If this all works and I am back on line with the blog, it will be a blessing for me.  I have really missed sharing quilting info and sharing with like minded ladies.

Again want to thank you for all your support, it really  means so much. One thing I did not realize, is the daily female friends I saw and interacted with. and the group discussion.  Hubby is wonderful, but he is not much on quilting dialog. I have heard there are Senior groups/classes around the area. But first to get the paintings hung, and feel I have some organization in my life.

Weather is cold but sunny. Seems even colder for some reason than in the mountain area we lived in.  The high mountains here have snow on them Mt Charles I think is the name, but have not found a topo map to really be able to understand where is stands between Ca, and Nev.

Again, Thank you dear friends for all your support, and hope I read my directions better tomorrow and can get on again!  Big hugs and Thank you's from Vegas. 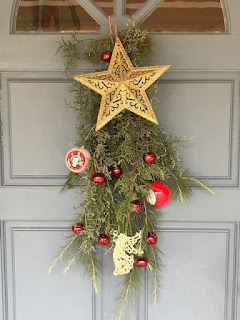 Hi, Yes, we are still alive. I would love to say this is our front door from this year, but it is not. And since I have not been on Blogger in too long. Things have changed again. And as far as I can tell, they don't make it easier.  But we do have a wreath on our front door, and when I figure out how to get the photos from my I phone over to here again. I will feel fortunate. We do like where we are, there were a few things on our wish list that did not come through. But all in all we are struggling to find places for my art and "studio". The office space worked out great for hubby and myself. He has his part of the room and I have my desk etc. Now it will be better when it does not have papers on all the surfaces.  The studio space, which is the living-room, is a challenge and harder than figuring out the office.  I am really anxious to get some quilting done. Actually anything to make would make my fingers happy. I think I have figured out a space for my Sweet 16. An 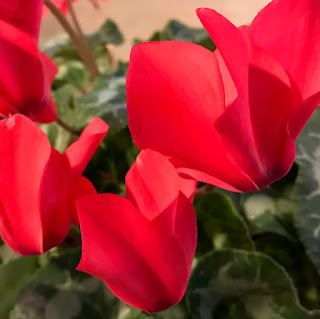 It seems every time I don't write for a bit, Something on Blogger changes. I need a teenager to help me. I changed to Gmail and now there does not seem the easy way to post photos in my files.. This photo was in my collection and seems appropriate to the coming season of Valentines. I will show photos of my progress in my studio when I figure out how to get them to my Blog. Progress is  slower than I planned. The issue is finding space in the garage. Only have a two car garage. Thinking of putting up a Tuff Shed in the back yard. Yes, it is big enough for that on the side. Purchases have slowed down a bit due to a blown engine on the Truck. Costly, but we are keeping it for the time being. well now will be a bit longer!  Do you think I want to give up my painting supplies or, my yarn or my fabric. However, I am wanting to get to my cotton upholstery fabrics that I was given awhile ago. Thought is to make  Queen size picnic blankets for the adult grans.Most of them seem to be havin 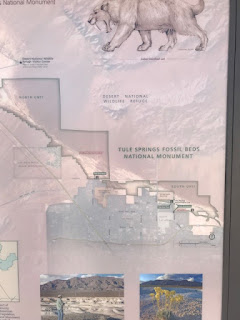 Exploring around our home area-Tule Springs

We found the Tule  Springs Fossil fields near our home. We were not prepared to walk part of it . Going thru our "stuff" for the next time we have a moment. It means bringing water, hats, walking sticks etc. HA. Still settling. I might have this photo thing organized and with practice will get it right, I hope. I miss chatting with so  many of you. Glad to hear you are all healthy and enjoying. Well, enjoy the snow?? But Spring is on the way. weather here is amazing. Our other big find is the YMCA that is very near our home I took a photo of the walking paths, but it is not a very good one. So next time we are there, will get in the midst of the trails. There is so much to do and see here. Many are very connected to nature. Because it seems this town has tons of walking parks, dog parks, and sports areas.  This walking path we found in Centennial Hills area, is connected to a large library ( lots of books for Ralph). we were so excited to find a library near us, but this on